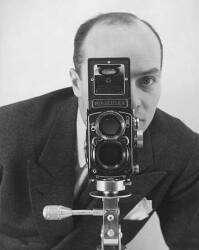 1920 Roland Alexander Pleterski is born on 21st April in Wiener Neustadt as the son of a businessman and his dressmaker wife.

1940–46 After his diploma, he is called up for military service and, at the end of the war, imprisoned in America for one year.

1946–49 Back in Vienna, Pleterski completes the course for fashion design and fashion graphics at the Academy of Applied Arts in Vienna under Professor Eduard Josef Wimmer-Wisgrill, former head of the textile and fashion department of the Wiener Werkstätte.

1949–1953 After completing his studies, he works for various high-class fashion boutiques in Vienna, including Neumann & Co and the boutique Stone & Blyth, run by the famous fashion designer W.F. Adlmüller. His responsibilities include fashion design, window display and sales. On the side, he also draws cartoons for various Austrian newspapers and, in 1951, encouraged by a friend, he start to take photographs, using a Rolleiflex camera made in 1930. The subjects of his early photography cover family and friends but also fashion, with his wife, Brigitte (neé Pluhar) and her younger sister, Erika, the future actress, and the famous Viennese model, Helma Pach, serving as his photographic subjects.

1953 Pleterski emigrates to New York with his wife, hoping to encounter better prospects in the fashion business there than are available in post-war Vienna. He becomes an assistant to the world-famous photographer Irving Penn, whose work he has admired in numerous fashion magazines even while still in Vienna. A friendship develops between the two men and Pleterski and his wife visit the Penns, repeatedly, on their farm in Huntington, Long Island.

1954–1959 Pleterski moves to Ted Croner’s studio — Croner being well known for his dynamic night shots of New York — and there works his way up to the level of studio manager. Their working relationship continues even after Pleterski leaves the studio, helping Croner in various capacities, until 1961. In 1956 his picture of the UN building in New York appears in the German cultural magazine magnum and a portrait of his wife is featured in 1958 in the magazine US Camera Annual.

1959 After a visit to Vienna, Pleterski returns to New York and to Irving Penn’s studio where he becomes studio manager and head of the department of experimental photography.

1960–1966 He opens his first studio in 1960 on the Upper Eastside in Manhattan and in 1963, with Al Tremaine, he founds Tremaine-Pleterski Studio Enterprises Inc. Files Corporation, the photo agency, which represents master photographers Irving Penn, Richard Avedon and Horst P. Horst, amongst others, takes him under contract in 1962. In 1964 he creates a series of photographic portraits of the artist Friedensreich Hundertwasser and his then wife, Yuko Ikewada, in Venice. In 1965 Pleterski once again visits Austria for a short time and becomes the cameraman for the surrealist film “Simplicius Simplicissimus” which is directed by Serge Kirchhofer a.k.a Udo Proksch. During his time in America, Roland Pleterski works for, amongst others, the department stores Lord & Taylor, Bergdorf and Goodman, Saks Fifth Avenue, the jewelers Tiffany and Harry Winston, and for Coca Cola and Marlborough. He also works for the Austrian optical product manufacturers Viennaline, Carrera and Serge Kirchhofer. His photographs are published by various glossy magazines, including Vogue, Harper’s Bazaar, Glamour, Mademoiselle, Show Magazine, Elegante Welt and Petra. Celebrities such as Julie Andrews, Rosemarie Harris, Paul Muni and Jason Robards as well as the most famous models of the era such as Dovima (the model best remembered for a photograph of her in a Dior dress in front of elephants, that is taken in 1955 by Richard Avedon), Ricki VanDusen Sunny Harnett, Evelyn Tripp, Barbara Mullen and Cherry Nelms stand before his camera.

1966 In November he returns to Austria for good and opens a studio for fashion and advertising photography in Vienna.

1969 Pleterski paints his controversial picture “The Blue Queen” – featuring Queen Elizabeth II of England lying on a bed paging through a magazine while wearing only her crown and underwear. When the picture is presented to the public in 1970 the international press calls it “an injury to her majesty’s dignity,” while the painter Ernst Fuchs calls the painting “the only important work of Austrian pop art.“

1970s Travel photography in Tunisia, Romania, Algeria, Morocco and Maldives as well as nude photos now dominate his work. In 1976 his photographs appear in Dina Larot’s book “Nachmittagslicht [Afternoon Light]”, in 1978 he publishes the cookbook “Landsommer – Ein Kochbuch für Stadtflüchter [Summer in the Country – a Cookery Book for Refugees from the City]” together with his third wife Friedrun (neé Pemberger). It is during this period that he produces a series of color slide portraits of representatives of the Viennese School of Fantastic Realism, the painters Arik Brauer, Ernst Fuchs, Rudolf Hausner and Wolfgang Hutter.

1980s The magazine International Photography, published by Kodak, presents works by Pleterski in 1981. In 1986 he publishes his much-discussed book “Wiener Ansichten [Viennese Views]” in which a nude model poses in front of, or on, various Viennese sights. In 1987, his photographs illustrate the cookbook “Bier und Küche [Beer and Cooking]” followed in 1990 by the “Summertime Calendar”.