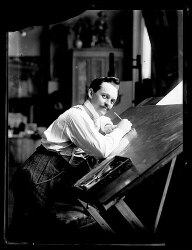 Ferdinand Schmutzer lived from 1870 to 1928. Originally a famous Viennese etcher and engraver, his photography work was only recently discovered under a Viennese rooftop in 2001. It had never been published. Like the Bavarian painters, Franz von Lenbach and Franz von Stuck, Ferdinand Schmutzer also used photographs as preliminary studies for his etchings. The naturalistic and documentary character of photography was very appropriate for his etchings. Not only was Schmutzer a noted engraver and copperplate etcher, he was also a highly talented photographer who possessed a remarkable refined light and shadow technique.

A first exhibition of his photographic work was held at the WestLicht/Leica gallery in Vienna in October 2001. By the end of 2003, all the negatives and photographs had been bought by the Austrian National Library (ONB) in Vienna. In 2004, an issue of the Taiwanese photo magazine Photographers International was edited by Regina Maria Anzenberger. It offers for the first time the most extensive selection of Schmutzer’s photographs. In September 2004, an exhibition was held at the Ping Yao photo festival in China and another exhibition in May 2005 at the Naarden photo festival in the Netherlands – both curated by Regina Maria Anzenberger and Uwe Schoegl from the Austrian National Library. In 2008 a new book has been published by moser verlag Munich.