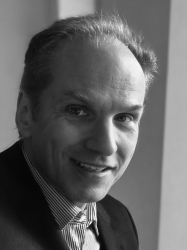 Thomas Herbrich, born in 1955, is one of the world’s more extraordinary photographers. His motto is: “Surprise yourself – and your audience!” He loves the spectacular. His photos often entail a great deal of time and effort, resulting in scenes otherwise associated with Hollywood movies. It is not without reason that he created the special effects for Roland Emmerich’s first movie, and he calls the great American director Stanley Kubrick his “guru”.

A trained photographer, he decided against entering the cine film trade and being a “small fish in a big pond”, and instead brought the world of film into his photos. As such he has total control over the final result. He even has his own workshop for special scenery and staging effects. His photos always toy with reality. He twists and distorts the contents … but only to the point that still leaves them believable. Like in the film world, his aim is to entertain, inspire and amaze his audience. Photo composition is the mainstay of his work; he is a recognized pioneer of digital image composition, an area he has been working in since 1990.

Thomas Herbrich also talks about his work in a very entertaining way. He regularly speaks at events on professional photography, at universities and schools of photography all over the world.