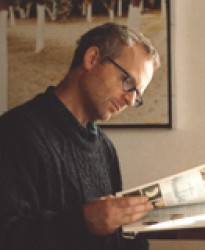 Simone Casetta was born in Milan in 1961. His collaboration with the studio of the Milanese portrait photographer Luciano Ferri led to his discovery of photography at the beginning of the 1970s. In the following decades, he received commissions from many leading magazines and firms.

Casetta has provided photographs for a series of magazines such as Abitare, Gente Viaggi, Anna, Amica, Domus, Der Spiegel, Corriere della Sera Magazine, Le Monde 2,  as well advertising for Ariston, La Rinascente, and Omnitel. Within the scope of his reportage activities – focusing on travel and social topics – he has journeyed to many countries including the Sudan, Rwanda, Zambia, Somalia, Pakistan, Cambodia, Argentina, Nicaragua, and Tanzania. In addition, he has pursued photographic projects with questions of intimacy and ethics at the core.

Casetta has remained faithful to analogue film material and develops the exposed material in his own laboratory. He works closely with writers who complement his projects with texts and also produces video interviews. He has taught Ethics and Practice of Photography at the University of Urbino since 2007.