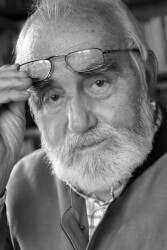 Born in 1937 in Vienna. He is one of Austria’s most renowned photographers. In addition to his publications in magazines like Die Zeit, FAZ, NZZ, Bell´Europa, Ovation Magazine, Smithsonian, Geo, Life etc., he has published about 150 books and worked on more than 200 portfolios with cultural and social themes.

He is a member of the Wiener Künstlerhaus. His photography work has received widespread attention by international galleries and art museums (Museum of Historical Art Vienna, Leica Gallery in New York). He has been honoured many times with medals such as the “Ehrenkreuz für Wissenschaft und Kunst of the Republic of Austria” and the “Silbernen Ehrenzeichen für Verdienste um das Land Niederösterreich”, the “Albert Schweitzer Medal” for journalism on European culture and many state awards for the most beautiful books on Austria.

His best-known book publications include the Austrian anthology Bunte Steine (2004 to 2005) with texts by the poet Adalbert Stifter and The Most Beautiful Country Castles in Eastern Europe, published in New York and translated into multiple languages. His 1978 book entitled Mount Athos was pronounced the most beautiful book about the Holy Mountain by the president of the monks’ republic.

If he is not on one of his many travels, Gerhard Trumler lives and teaches in Vienna and at the Rosenhof in the north of Austria called the Waldviertel–in the landscape of his dreams.
Gerhard Trumler has been represented by the Anzenberger Agency since its founding in 1989.