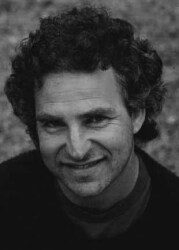 Born in South Africa in 1956, where he continues to live and work. He has a large body of work that explores people, life, culture and the environment around him, going beyond the news and headlines. He has worked for a number of international publications including Time, LA Times, New York Times, Independent and Spiegel. His images have been exhibited and published widely. In Search of the San was a long and in-depth documentation about the lives of the modern San (bushmen) living in Namibia, Botswana and South Africa. His work with the Kosi Bay fishing community received the Mother Jones Documentary Award.

Once We Were Hunters explores how indigenous people in Africa relate to their environment, conservation and tourism in challenging times. Impressions of an African City is a documentary project about his home town Durban. His recent book, Travelling Light, is a personal photographic journey reflecting on 25 years of his photography in southern Africa. He is currently working on a long term project on religions, rituals and faiths in southern Africa. He has also made documentary films – Trancing in Dreamtime is about the meeting between San and Aboriginal musicians, and Double Vision explores the South African diaspora in North Carolina, USA.