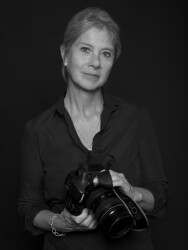 Originally from a small town in Texas, Lynn Savarese resided and traveled throughout the world before making New York City her home in the early 1980s following her graduation from Harvard Law School. After careers in corporate law and investment banking and a lengthy sabbatical to raise her family and pursue volunteer work for various human rights organizations, Savarese finally found her passion—photography—several years ago. Since then, her photography has appeared in numerous shows and publications worldwide and she has won several prizes and honors, including being selected as a Finalist in the 2016 Magnum Photography Awards competition.

Mounted bird specimens have been a longstanding subject of fascination for Savarese in her photographic pursuits. In her award-winning series, Plumigeri, she strives to capture the haunting charisma of these ‘animal things,’ even when they’ve been neglected or abandoned, as well as the ethical challenges they represent. Despite their tragic circumstances, these ‘bird objects’ still exude great personality and dignity, and paying them tribute became for Savarese a reverential mission.

Water is also one of Savarese’s favorite subjects to photograph, and to capture it, she has traveled far and wide throughout the world. Her aim is to engage in intimate interactions with water in all of its manifestations--from calm to turbulent, from gently lapping to crashing in frothy tumult—to better evoke how water uniquely soothes and excites, inspires and consoles.

Savarese also frequently works on social justice efforts, to help further their missions through strategic photography projects. As the co-founder and photographer of The New Abolitionists, a groundbreaking project to fight human trafficking, she has received a number of awards and honors for her work. Savarese also accepts commissions for commercial projects from time to time.

Awards
Finalist, Magnum Photography Awards 2016 international competition
Selected by jury vote to be included on THE ARCHIVE, a web gallery at ai-ap.cpm, as part of The Latin American Fotografia 4 Winning Collection, an honor extended to 37 photographs out of hundreds of submissions.
Visitors’ Award and Honorable Mention, 2015 A. Smith Gallery, Johnson City, Texas: Water