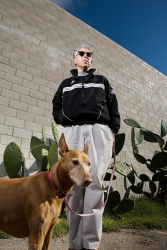 Richard Ross is a photographer, researcher and professor of art based in Santa Barbara, California. Ross has been the recipient of grants from the National Endowment for the Arts, the Annie E. Casey Foundation, Fulbright, and the Center for Cultural Innovation. Ross was awarded the Guggenheim Fellowship in 2007 to complete work on Architecture of Authority, a body of work of thought-provoking and unsettling photographs of architectural spaces worldwide that exert power over the individuals confined within them. Aperture Press published the work in 2007; it was also named one of the best exhibitions of the year by ArtForum. Ross’s Guggenheim support also helped launch an investigation of the world of juvenile corrections and the architecture encompassing it. This led to Ross’s most recent work, Juvenile In Justice, which turns a lens on the placement and treatment of American juveniles housed by law in facilities that treat, confine, punish, assist and, occasionally, harm them.

Ross's work has been exhibited at the Tate Modern, London; National Building Museum, Washington D.C; Santa Monica Museum of Art, Los Angeles; Aperture Gallery, New York; ACME. Gallery, Los Angeles; and the San Francisco Museum of Modern Art, San Francisco. He was the principal photographer for the Getty Conservation Institute and the Getty Museum on many of their architectural projects. He has photographed extensively for the Canadian Center for Architecture, Nike, New York Times, Los Angeles Times, SF Examiner, Vogue, COLORS, Courrier, and many more. A dozen books of his work have been published including Architecture of Authority (Aperture 2007), Waiting for the End of the World (Princeton Architectural Press 2005), Gathering Light (University of New Mexico 2001) and Museology (Aperture 1988). Ross has taught at the University of California, Santa Barbara since 1977.